Part II of the King Crab Challenge was the Baltimore 10-Miler. This is a local race that is well known for their amazing premium. Seriously they wins awards for them. I signed up for this race solely due to it’s status in the King Crab Challenge. Otherwise, I’d heard of it, but it takes a lot to get me to trek out to Baltimore at 5AM. Packet Pick up was held in various areas throughout Maryland the week before the race. Thankfully, the closest pick up (still 45min away) was on my husband’s day off. So he picked up our packets. This only included the bib and some coupons. The premiums for this race are given in the finisher’s area.

Hubby and I left the house at an ungodly early hour (5:30ish am) and began the trek towards Baltimore. We arrived around 7am. The races wasn’t slated to start till 7:30am so we thought we were in the clear. False. Turns out there was like 1 road to get to our parking and it was packed. This was due to a short traffic light and runners crossing the street about a quarter mile ahead of us. When we finally parked, we quickly tried to collect ourselves and charge across a field to the start. It was already 7:20. Unfortunately, we still had to cross a field, use the restrooms, and get to the start. Thus begins the run to the bathrooms, which took a few minutes to find. Then while in line stalking our watches an announcer comes on with amazing news! The race start was being pushed back 10 minutes due to the traffic entering the park.

There was a collective sigh of relief among the people we saw. This allowed us to take our time and walk over to the starting area. There were no set corrals but they did offer a waved start. Hubby moved up to start with wave 1 and I hung toward the back to start somewhere around 3. It was a bit crowded but nothing out of the regular. 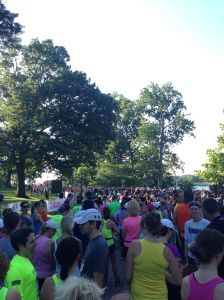 Now I don’t know about anyone else but when I think of Baltimore I picture 2 very different things….

It’s less than glamorous side

So I really didn’t know what to expect. I was pleasantly surprisde by how pretty the first 2 or so miles were. Truly Druid Hill Park is just a lovely oasis in this large city. We ran along a lake. As the miles passed the heat and humidity became palpable. You can feel it. That day the humidity was around 70%. Thankfully, the Baltimore 10 Miler folks were adaptable. They added additional water stops that were very much appreciated. There wwas somewhere between 5-8 along the course (I think). All I know is every time I felt that heat creeping back up I saw another water stop. At each stop I was taking 2-3 cups of water. I was only actually drinking one and throwing the other 2 in my face or over my head to cool me down. It worked very well.

After the first 3 or so miles we did pass a few blocks that reminded me a little too much of The Wire. However, in the Baltimore 10-miler’s defense there were police officers everywhere! There was one at every intersection and several in the street. I felt very safe the entire time. We ran though this neighborhood for about a mile. Then we were quickly diverted back to cute little row houses that lead us to another lake. The course continued around the lake. Since this is an out and back the lake acted as the turn around point. I bumped into my husband who was just finishing the lake portion as I was heading towards it. It was great timing. I let him know that 2 hours was not going to happen. Between the hills of Baltimore and the heat. I was just trying to make sure I didn’t hurt myself at the start of marathon training.

Yes, I’m flushed. I was running on the surface of the sun 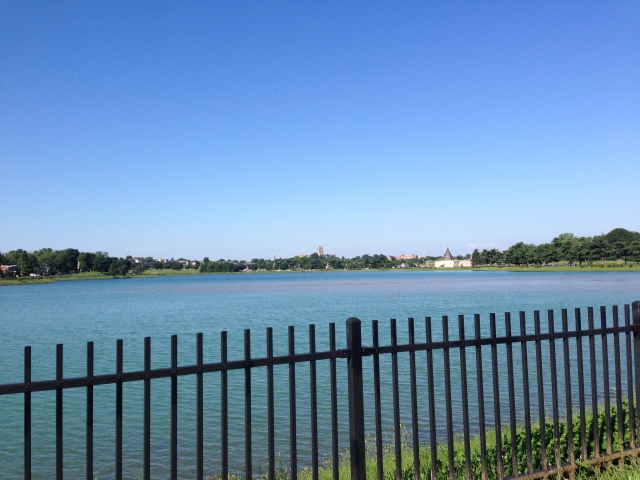 points for being pretty

The humidity was really getting to me at this point. My entire body was covered in sweat and the water I had used to cool myself down with… (not cute.) I felt like the last 3 miles went on forever and then I realized that was probably due to all the hills, I had been running. Hills are my Kryptonite…

This is what I get for not looking at the route until the day before the race.

Eventually I made it to mile 9. The large hill wasn’t my favorite part. I slowed my pace and just enjoyed the scenery. The volunteers were amazing and the people cheering was awesome. There was a fantastic presence about this race that made the heat much more bearable. There was this little community garden, mini Baltimore exhibit and historic cemetery all within the last half mile. It was actually really cool. At 9.85 miles I saw my hubby on the sidelines ready to cheer me in. He ran with me for about .1 miles then allowed me to triumphantly go through the finishers area solo. We met again at the exit, traded stories, and sweaty hugs.

We did it!! And I kind of have dreadlocks…. (that took forever to get out)

They provided watermelon, power bars, ice cold towels, water, Gatorade, and a few other items in the chute. We made our way over so I could pick up my premium and it was just as glorious as I’d imagined. Afterward, we headed out. They had a huge set up for after race festivities but I just wanted a cold shower, chipotle and Netflix. (Life’s simple pleasures)

The Baltimore 10-miler was a fun local race that was very well done. I would recommend it to anyone. Despite the heat, I enjoyed myself very much. This race to me acted as my official kickoff to marathon training season, so I took my time and treated it like any long training run with LOTS of hill.

Above everything, I really do think that Corrigan Sports knows how to execute a great race! I’m looking forward to the Baltimore Half Marathon in October.

What do you do to deal with humidity? How do you tackle hills? What do you enjoy doing after a race? Have you ever run a race with lots of police officers? What races have you done recently? Do you have throw the water cups in your face like a boss?